Donat P. Marxer to Serve as Honorary Consul-General of Japan in Liechtenstein 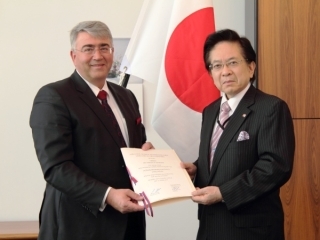 Liechtenstein and Japan established official diplomatic relations in 1996, and after more than 20 years of friendly relations, the need to take those relations to a higher level naturally led the Embassy of Japan to Liechtenstein to consider the possibility of having a representative on the spot.

"We are thankful to have Donat P. Marxer as our newly-installed Honorary Consul-General. Having someone stationed in Liechtenstein who can consistently promote the existing relationships between our two countries and help develop new ones is very important," says Ambassador Honda.

Dr. Marxer is the director of Medipolan, a company active in the field of management consulting based in Schaan, and the board member of various companies, foundations and associations in Liechtenstein. As a very well-known and respected figure in Liechtenstein, he can actively encourage actions to familiarize the people of Liechtenstein to the many facets of Japan.

Dr. Marxer’s strong connection to Japan dates back to his appointment as member of the executive management board of Hilti Japan in the middle of the 1990’s. His good knowledge of the country will help facilitate mutual understanding and build bridges between the two countries.